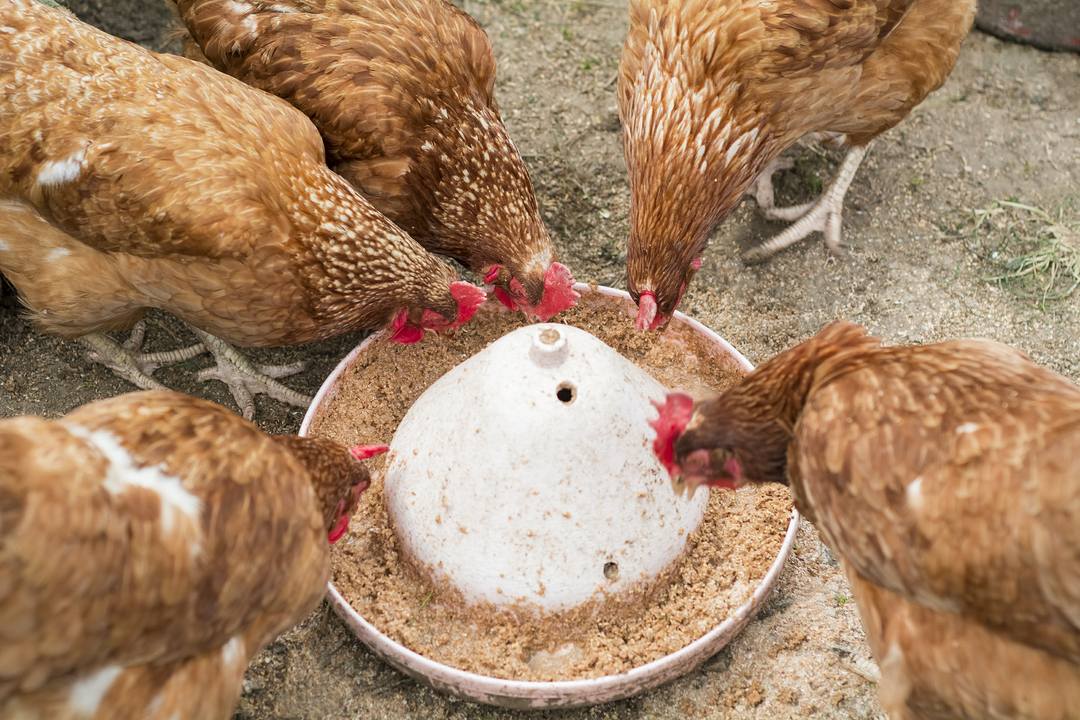 The following descriptions may supplement the above source. Cereals and cereal by-products.
Examples of grains for supplementing scavenging poultry include millet, sorghum, maize, and rice in the form of whole and broken grains.
Amounts supplied are inadequate when using the surveyed estimate of 35 g supplement grain/bird.day (Obi and Sonaiya, 1995). This and the tannin content of sorghum have led to a search for alternative grains and the evaluation of agro-industrial by-products.

This can be used with vegetable and animal protein supplements for all types of poultry. Rough or paddy rice, off-coloured rice and broken rice have been used up to 20 to 30 percent in poultry rations. Rice bran has a moderate quality protein of 10 to 14 percent, approximately 10.4 MJ of Small-scale poultry production 17 ME/kg (2 500 kcal of ME/kg), and about 11 percent Crude Fibre (CF). It is rich in phosphorus and B vitamins. Because of its high oil content (14 to 18 percent) it easily goes rancid. For this reason it should make up no more than 25 percent of the ration. This also applies to rice polishings. Rice bran usually includes rice polishings, but is often adulterated with rice hulls/husks, which are very high in fibre and silicon, and have a low nutritive value. Nevertheless, rice bran is still an important feed resource.

This is a by-product of the extraction of starch from fermented, wet-milled maize, which is usedas a breakfast cereal in West Africa. It usually has more than 16 percent Crude Protein, although the amount varies according to the maize variety and processing method.

By-products from local breweries and other local industries

Brewer’s grain and yeast have become common ingredients for poultry rations, but the process of drying the wet by-product can be very expensive.

Non-traditional legumes, such as boiled jack bean (Canavalia ensiformis) and sword bean (Canavalia gladiata), have been shown to be acceptable to laying hens, although they should not form more than ten percent of the ration because the sword bean is of low nutritive value (Udedibie, 1991). Winged bean (Phosphocarpus tetragonolobus) contains approximately 40 percent Crude Protein and 14 percent oil, and its overall nutritive value is very similar to that of soybean and groundnut cake for broiler meat chicken (Smith et al., 1984). Winged bean leaf foliage is also acceptable to laying hens. Unless the plant is grown with stake supports, the yield is very low, which makes its cultivation on a large scale less economical. However it is suitable as a feed and fodder crop for smallholder poultry.

This crop is being grown increasingly for human consumption. If the cotyledons (fleshy beans) are used for human food, the testa (bean-seed coat) is given to poultry. Raw soybeans heattreated by boiling for 30 minutes and then fed to scavenging birds in amounts of up to 35 percent of the ration resulted in satisfactory performance in broilers and laying hens. In pullets and layers fed raw soybeans with no heat treatment as 12 percent of the ration, there was a significant reduction in body weight at 20 weeks, as well as a delay of four days in the onset of sexual maturity (as measured by age at the 50 percent egg production). The heat treatment destroys a trypsin (a digestive enzyme present in the intestine of poultry) inhibitor, which, if left intact, prevents digestion of raw soybean.

This legume crop is grown solely for human consumption in Africa. Its by-products, especially the testa (seed coat), are used as a feed for small ruminants and have also been fed to poultry (Sonaiya, 1995). The testa represents about six percent of the weight of the whole cowpea, but is usually discarded (in West Africa) when the cotyledons are made into a puree for a locally popular fried cake. With its crude protein content of 17 percent, its apparent metabolizable energy (AME) value of 4.2 MJ of AME/kg (1005 kcal AME/kg) and its mineral profile (44 g ash/kg; 9.0 mg Ca/g; 0.9 mg P/g), cowpea testa should be a good feed resource, but the presence of tannin (53 mg/g) and trypsin inhibitor (12.4 units/mg) limits its utilization. Cowpea testa should not make up more than ten percent of the total feed of a poultry ration.

Tags: Chicken feed what should i feed my chicken