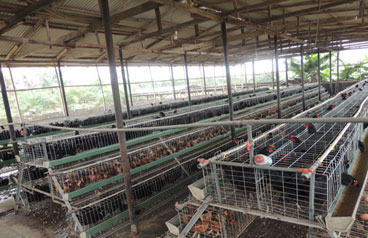 Light: duration and intensity
A well-lit house is essential. A dark house leads to lethargic, inactive, unproductive birds. Light
is important for feeding, as poultry identify food by sight. This is especially important for
intensively managed day-old chicks, which need very bright 24-hour lighting for their first week
of life.
Light is also an important factor in sexual maturity. An increasing light proportion in the
day, as naturally occurs from mid-winter to mid-summer, will accelerate sexual maturity in
growing pullets, bringing them to lay sooner. If hens are already laying, the increasing light
proportion will increase egg production. The opposite effect is also true: as the light proportion
of the day decreases (as naturally occurs from mid-summer to mid-winter), then sexual maturity
is slowed in growing stock, and egg production is reduced in laying hens. These effects are
somewhat reduced towards the equator, as the difference in the daylight proportion of a day
changes less and less.
This physiological effect on poultry is important in terms of maintaining egg production in
commercial flocks, and requires supplementary lighting programmes. Regular and reliable electricity supply is required for such programmes, otherwise the effect can be made worse by
breaks in the light supplementation system. A slow but steady increase maximises the rate of
production. However, lighting programmes producing an effective daylight proportion in excess
of 17 hours per day can have a worsening effect on egg production. A 24-hour security lighting
system can have such an effect on egg production.
Birds do best in situations where there is plenty of natural light that does not raise the
temperature of the house. Natural light is preferable unless regular, reliable and well-distributed
artificial light can be provided. It is recommended that the interior of the house be whitewashed
to reflect light. The intensity or brightness of the light is also important. Egg production will
decrease at light intensities lower than five lux (the “lux” is the metric unit of light intensity and
can be measured by a meter similar to that measuring light intake into a camera lens), although
meat chicken will keep growing optimally at light intensities as low as two lux (not bright
enough to read a newspaper). These intensities are measured at the eye-level of the bird, not
near the light source. Unless supplementary lighting is spaced uniformly, there may be areas in
the building insufficiently lit to allow optimum growth or egg production. Designs for layout
assume that the light bulbs or tubes will be kept clean, as dusty surfaces will reduce light output.