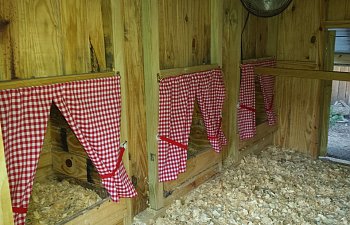 The unrestricted free-ranging of poultry is often a problem. They trespass onto neighboring fields and gardens, and are constantly at risk from predators and transmitted infections.
Confinement is often not practical because of the cost of feed and fencing, while surveillance is only feasible where the very old or very young of the household have time to help.
Use of cocks
Fencing of vegetable plots is in many cases the best option. Placing more cocks in the village might reduce the movements of the chickens, as the cocks and hens of each flock would keep more to their own territory. Cocks move within an eight-to-ten-house territory, and hens within two or three houses.
Under the free-range system, the difference between the amounts of food   gathered through scavenging and the total food requirement for maximum production should be balanced with nutrients supplied from supplementary feed.
To make up a properly balanced supplement, it is necessary to know the scavenger feed resource base (SFRB) and the composition of the crop contents. If you don’t know this then I recommend  the fowls have access (using a free-choice cafeteria system) to three containers (or three compartments of a bamboo stem feeder of ingredients comprising a protein concentrate, a carbohydrate source (for energy) and a mineral source (mainly for calcium carbonate for egg shell formation for the hen).
Poultry should have free access to this cafeteria system for two to three hours in the evening to supplement the day’s scavenging.
Also read:
How Nigeria connects small hold farmers directly to buyers
How to add animal protein to your chicken flock
Secrets of Ugandan billionaire farmer Erisa Kakyomya
Feed resources
From a feed resource point of view, this recommendation is only economically viable (sustainable) if the consumption of supplementary feed per egg produced is equal to 150 to 180 g or less. Consumption of over 150 g is only justified if the supplements are cheaper than the commercial feed used in intensive poultry production.
Supplements are usually recommended in the range of 50 to 80 g/bird/day, so it is usually quite viable. Seasonal variations in the SFRB have a substantial effect on production. During the dry season, scavenged feed from gardens, crops and wasteland (such as grass shoots, seeds, worms, insects and snails) stops, while the quantity and quality of household kitchen waste decrease.
The feed supplement should be adjusted seasonally to maintain an optimum level of production or, alternatively, the chicken population could be adjusted to the amount of the SFRB and the feed supplement.
Hens in confinement fed a balanced diet will convert food weight to egg weight at an efficiency of about 2.8 kg of feed per kilogram of egg weight. Changes in husbandry alone may increase the productivity of scavenging village chickens, without the need for additional inputs.
Fertilizers
In planted orchards, a stocking rate of 120 to 180 birds/ha will clean up windfalls while also fertilizing the trees.
In this example, the amount of fertilizer produced per hectare for 150 hens (weighing two kilograms each) is based on the assumption of 500 g of fresh (70 percent moisture) weight of manure produced per kilogram of live weight per year.
This results in 330 g of dried manure (dried to a ten percent moisture content) per hen/year, and thus the 150 hens will produce 49.5 kg of dry manure per year. This has an equivalent fertilizer value of 13 percent ammonium nitrate, 8.6 percent super-phosphate and 2.9 percent potash (potassium) salts. Thus the 150 hens will produce the equivalent per hectare/year of 6.4 kg of ammonium nitrate, 4.3 kg of super-phosphate and 1.4 kg of potash salts.
Like us on facebook @MkulimaTODAY and share this article

18 thoughts on “How to take care of your chicken flock”